🎼 Functionally programming The King of Pop

Well over a year has passed since I started this post – the real world got in the way. I’ve spent “some” time revisiting the post itself but also the code, music and process around something it. As something a little “out there” in both (semi-)musical and programming endeavours, I hope it was worth it…

Oh, but if you’re feeling a bit TL;DR, skip to the music.

In the previous post, we looked at the Haskell library Euterpea to create simple music using (functional) programming techniques and General MIDI.

In this part, we’ll take some of these ideas further, and create something resembling a full piece of music, in fact a cover of a well known song. As it’s concentrating more on the audio side than the coding side, I assume some basic music / audio engineering knowledge, but don’t let that put you off.

The King of Pop

It seems appropriate in the (EDIT: still) current light of EPA-destruction and climate treaty withdrawals to choose the mid-90s ode to the salvation of the planet by the late King of Pop himself, Michael Jackson. 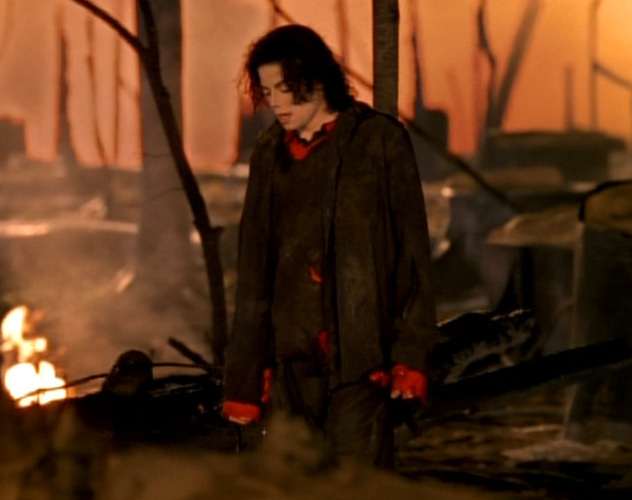 Of course, it is completely inappropriate to choose this song, as:

But then, it wouldn’t be fun without a few challenges!

ℹ️ Interactive is always more fun, so I’ll be providing a few GHCId (interactive REPL) commands along the way. To get set up, you can see the previous post, or here’s the short version:

Note my aChordof helper function (which saves a lot of typing / promotes re-use). It takes a list of notes (without duration) and creates some Music.

A quick aside on $

ℹ️ Haskell’s ubiquitous yet mysterious-to-newbies $ operator can be used for more than just avoiding brackets, as I found out a while ago myself, to some confusion. For example, you can apply a parameter to a partially applied function:

The parser doesn’t need a space for it, either (but you do need the parentheses):

or something a bit more melodic:

Luckily, the drum pattern here is relatively simple. The subtleties and performance are another matter, but we’re in the business of approximating here.

I find that the list format of line is useful for drum patterns, and it’s best if possible to keep these even measures, or you go mad. Eighth notes are good here, so let’s adopt that.

Once we have that vocabulary defined, it’s easy to talk about simple drum patterns!

Note how we did the fill by re-using existing eighth-note definitions and using the tempo modifier to double the speed of the whole phrase. DRY in action! (the fill itself needs some work though, sorry, purists).

The cut function is very useful – note how it can take non-integer durations too – so reusing drum patterns is easy, as you can cut off the end (adding a fill instead) rather than duplicating a large part of the content. More DRY, essentially.

Try it in your REPL:

Is this a good idea?

Not only is this definitely not semantic either (a bit like View code in your Model in MVC), but this is not even vaguely a good idea anyway: Your results will definitely differ. Rendering the output is the only guarantee, and even that’s not so much fun. 1

So that said we’ll continue regardless 😄…

I found the SoundFont I was using (Timidity plus FreePat, I think) was nice in places but horrible in others, and especially lacked some thickness in the drums. So creating that huge 90s drum sound was challenging.

Subharmonics (octaves below the actual note) are nice when used well. This is a very blunt way of doing this. Remember we haven’t got any signal processing capabilities here – we’re committed to 100% General MIDI! 🤘

Now I will confess a complete lack of knowledge around arranging pads and strings, so most of this feels very wrong, and pretty basic at best. Perhaps someone out there can advise better practices.

The idea was to take the simple three-part harmonies and replicate across instruments, layering and mixing to get nearer to the sound. Several parts were transposed an octave up (transpose 12) to occupy more of the spectrum. Some parts had tension notes (e.g. sus9), which generally were only in the upper registers, sounded a bit too muddy otherwise. All in all, I had to keep turning the velocities (volumes) down, it’s easy to drown the mix in midrange, when the actual song is very full.

Building up the song structure

In the previous post I explained how coding could be used to avoid repetition in the notation of the music (at the expense of some complexity, of course). With the amount of variation that crept in, the usefulness of this actually decreased quite a lot, but never mind…

Like with any refactoring, a good start is simply extracting well named constants / functions. Then we can use built-in combinators (see the useful Euterpea quick reference for more):

As mentioned, I found it useful to keep named constants for parts of sections. For example:

It’s worth mentioning the phrase function. This allows us to add all sorts of performance-type changes including dynamics like Crescendos, staccato (I used a phrase [Art $ Staccato 0.9] to dampen bass strings – though this is a real fudge as any even beginner bass players know not to let notes ring, plus the common slide or glissando used here isn’t possible AFAICT).

As I incessantly tweaked further, this seems like the only way to start to get dynamics (though can’t be used for fades unfortunately).

Percussion is tricky, and fills are definitely hard to learn or notate. As always it helps to be able to hear the parts individually (this drumming video was useful).

Eventually it comes down to the amount of time you can devote to obsessing over the exact fills – whether it’s getting them exactly right, or even bothering with the variations at all. Session musicians are often very, very good at what they do (without grabbing the spotlight!), and I have even more respect for them now.

A useful tip was to run the whole thing at double speed using tempo 2, meaning that the eighth-note shortcuts defined earlier are re-usable for sixteenth notes.

As an former / occasional dabbler in bass guitar and various bass-driven genres, I’ve long been aware the subtleties of “simple” basslines. As usual though, this one caught me out completely: the main four notes (A♭, B, D♭… and E♭) are clear… but the excellent performance throughout the track has complexity in the form of timing nuances (funk!), dynamics, ornaments and many variations / fills that make this sequencing very hard. I’m not going to lie: a huge amount of trial and error, and referencing bass tabs was necessary, and even then the result is massively simplified.

I’ve skipped the many definitions of functions used , but by now you should be able to imagine what they look like.

A multi-step process… ended up getting a bit DevOpsy after all hundreds of the run-throughs (aargh).

Using Web Audio, the complete, generated audio, together with Jackson’s acapella audio (hacked out from the music video by the Internets).

Try some basic remixing – you can alter the volume of each audio.3 Unfortunately the syncing / timing breaks in some browsers a bit, which is pretty annoying. Recommendation: don’t fast-forward / rewind (the first time, at least).